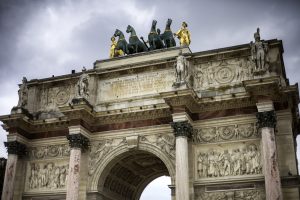 It started out like any other morning that week in Paris. Harper and I would get up around 7:30-8:00, I would make a quick cup of instant coffee, throw on a jacket over my pj’s and go for an expedited walk around the block so Harps could go to the bathroom.  I know—probably not smart going out technically still in your pajamas, but really it was just a quick trip around the block—what could possibly go wrong? Oh lemmetellya what could go wrong…

Around the block we go, Harps goes pee-pee and we head back to the Airbnb, fob back into to 2 doors to get into the lobby, up a flight of stairs and put the key in the door.  A turn to the left, not opening. A turn to the right, not opening. A turn to the left, right, left right left left right right. NOT OPENING!!  So, now I’m panicking, looking around to make sure I am in the right building. Why? Because earlier in the week when I was trying to check in-I was not in the right building. The fobs had let me into the lobby of a different building but after repeatedly trying the key in 3 different doors—none opened. A hysterical call to the host’s parents (the host was out of town), they came to meet me at the “correct” building and showed me that the key did indeed work if you were at the right building. Apparently, there is a 15 Rue Violet and a 15 “B” Rue Violet. I had been trying to get into the latter when in fact the reserved Airbnb was in the former. Ugh………Paris!

Back to the locked out morning. So-luckily a neighbor leaving for work saw me trying to furiously get into the apartment and made eye contact with me-no one here would EVER ask you if you needed help with anything, but I took eye contact as an opening, luckily he spoke English so I pleaded with him to help me with the key in the lock. He tried in vain 3 or 4 times and asked a series of questions trying to figure out what could be happening and then said—that this would only happen if you had a key in the lock on the other side of door….UGH! YES! That is exactly what I had- a key in the lock on the other side of the door!!  Why? Because the doors here lock from both sides so that you can also lock yourself in at night. Well, in my pajama wearing haste—I had grabbed the spare set of keys earlier not the one in the inside lock so I had essentially locked myself out from the inside! Nice neighbor guy looked up a locksmith, called explained the situation to the person on the other end of the phone in rapid French, looked back at me and said it would be 20 minutes and 80 Euros—was I okay with that? OMG-yes, a small price to pay for a really stupid mistake. Well..if it only ended there. I felt somewhat relieved as I go outside to wait for the locksmith on the stoop.  As I sit outside on the stoop with Harper, loads of people are walking by me on their way to work. Many people are glancing down at me with a look of disdain or pity? Hard to know which. Why I wonder? One woman eyes me suspiciously and walks by me several times and gets on her cell phone. She then proceeds to speak to me in French—motioning for me to leave and something about the “policia”. The policia? This much French I knew. WHAT in the H*ll is she talking about? Why would she be calling the police? Well, remember that I had said I was a bit morning-dishelved and wearing my pajamas with my coffee? After realizing that I speak English-she explains to me that because I was sitting on the stoop with my now empty coffee mug and my dog that she has mistaken me for a “beggar” and that I had brought the dog along for sympathy ! OH MY GOD. I couldn’t make this up if I tried. I explained to her that I was just locked out-pointed out that I was indeed wearing a brand name Northface vest and had Rayban sunglasses on and that I was not begging for anything (unless you count begging to get back in the apartment but I didn’t tell her that). She seemed satisfied, offered a mild apology and walked off.  A beggar? Seriously?

Another hour goes by and still no locksmith. Now I go next door to the Korean BBQ place that has finally opened, explain the story again basically with pantomiming to the Korean man behind the counter, ask for him to look up the locksmith and to please call him for me. The man calls the locksmith but now they are saying they can’t authorize anyone to come because I don’t live there, only staying in it as an Airbnb. They tell me I need to get in touch with the host. Oh hmmm, I have no phone and no contact information on me-how am I going to do this I wonder. Korean man hands me his phone to look up information in my email—great idea! Only the phone is in Korean. All of the characters are in Korean.  FOR THE LOVE OF GOD ARE YOU KIDDING ME RIGHT NOW? I try and ask him to switch it to English, please. He speaks Korean and French and very broken English. He doesn’t know how. I punch a few buttons, ask again if he can switch it to English or google translate, he stares at me blankly and I hand him back the phone. On the verge of tears now thinking Harper and I are actually going to have to become beggars-a young kid comes out from the back room, the man explains to the child something in Korean (probably that I’m a stupid American, locked out and need to change the phone to English to look up my email.) 5 seconds flat that was done, I was in my email and had a contact number. The host called the locksmith, he shows up and said it was not going to be 80 Euros like I had originally been told but 500 euros. WHAT??? I had to get in so I agreed and he whipped out some type of board that he slid between the cracks swiped it down and the door was open faster than you can blink. My credit card was charged and off he went. I was 500 euros lighter but back in the apartment, key out of both sides of the door and feeling like maybe this was all a bad dream. I was still in my pajamas after all.

Lessons learned: Do not go out of the house without your phone, some emergency money, and multiple ways to contact the host written down in French (and maybe even Korean) on paper.  And most importantly NEVER leave the house in your pajamas no matter how short you think the trip is going to be!!

Kathleen
View all posts by Kathleen →