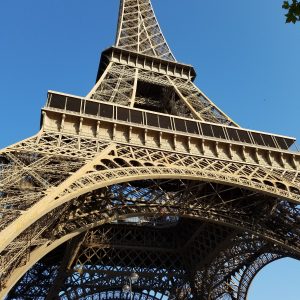 Unless you want to take a few years off your precious life. If it wasn’t bad enough that we arrived on a Friday during rush hour but also in a torrential rain storm. The streets were literally flooding and people were coming out of nowhere dashing in front of the car, hitting the hood if we failed to see them and screaming what I can only imagine were some pretty bad French explicatives.  I accidentally went down more than one one-way street only to encounter more angry explicatives coming from every person driving and walking. The navigation said “route recalculating” in a lovely French female voice so many times that I was getting concerned she was going to either run out of calculations or run out of patience or worse: both.  On our initial entry into Paris, I glanced down at the time to destination on the screen-28 minutes—each “recalculation”, that number got higher and higher- 37 mins, 48 mins and then 1:06 ONE HOUR AND 6 MINUTES? How did we double our time and then some? Ugh, I didn’t think we were even in Paris anymore. The rain subsided and somehow, we made it back into Paris and to the teeny, tiny narrow street that our Airbnb was on. I was in a Jeep Renegade-not exactly suited for teeny tiny narrow streets.  Of course, there was nowhere to park so out of desperation I parked on the sidewalk.   After locating the bakery that the key was being kept for our Airbnb, I thought I located the correct apartment only to be locked out of it.  Turns out there was more than one apt. no 15 on the street. Where were we? at 15 B. How would you know you were at 15 B vs. 15? Oh…because 15 B had the teeniest of tiniest of three letters “BIS” which apparently represents “B” in France placed in the upper corner of the sign that only someone with radar vision could possibly see.  Why of course.  But in the pouring rain and utter exhaustion, I failed to look 2 doors down at the “other 15”…..But that is a whole other story that I’ll  save for another entry. We checked into a hotel and called it a day.

Time to return the rental car the next morning and almost lose my life. Seriously. I thought what could be so hard about returning the car to a major, well-known location like Charles De Gaulle Airport? Punch the name into the navigation and off I go. I felt like I had recovered enough from the miserably- lost- in-the-rain-during-rush-hour-traffic-trauma from the night before, the sun was shining and I was very comfortable driving in a major city. Throughout the years I had successfully driven in Boston, San Francisco, and even New York- all major traffic-y, tricky to navigate cities—what could be so hard about driving in another major city like Paris? Well, lemmetellya…..THE FREEKING INSANE ROUND A BOUTS..that’s what!!  The navigation system would say something that sounded rather simple like  “take the 6th exit off the round a bout”. So while simultaneously counting exits, staring at the nav screen making sure what I think is an exit is indeed an exit—cars are flying by, cutting me off, turning so close to me that I am now experiencing sheer terror. I don’t understand the rules of who has the right of way. Was there a right of way? Were there rules? I proceeded to find out that apparently there were rules and I had egregiously broken one. Which one? I still do not know to this day. I’m busy counting my exits, slowly proceeding around the round a bout and all of a sudden the horns start honking, people are slamming on their brakes, French explicatives are being screamed out windows and I am thinking—“Whoa, someone did something terribly wrong!!” Well, that person was apparently ME! I was then forced off the road by a car and a motorcycle with two irate Parisian men. They cornered me-one in front, one in back so that I couldn’t get out. People on the streets were also staring at me and screaming in French. I still didn’t fully comprehend what was going on so I was honking and motioning to the guy in front of me to move so I could go on. And then they both got out of and off their vehicles and come storming over to the car. I was officially terrified at this point. They were banging on the hood and the front and side windows motioning for me to roll my window down. Over my dead body (which I feared would be sooner than I thought)—was I going to roll down my window for them only to reach in and strangle the life out of me. I just kept repeating “I’m sorry” “Pardon” “I’m sorry” “Pardon, Sil vous plait” over and over again. I still didn’t know what I had done. Did I run over a small child and not know it? Did I cut someone off? Or did I just fail to yield? Whatever it was—I guess it deserved a 20-minute French tirade and near death threat. At one point the guy on the motorcycle went to open a compartment on his motorcycle—reaching in to grab something that I was convinced was going to be a gun. Luckily, a small child was on the back of the motorcycle which I was hoping was his daughter and that he wouldn’t possibly shoot me in front of her. Would he?  Manic thoughts of what would happen to Harper if I was in fact murdered in the round a bout was going through my head:  When would they find her? Would they find her? No one knew the address of where I was staying. Panic set in. And then the man pulled out a towel—wiped his brow, screamed a few more what I can only imagine were choice words at me and got on his motorcycle and drove off. Holy smokes, I had survived whatever that was and was back on the road to return the car. 2 more terrifying round a bouts, a stop in a horribly sketchy neighborhood to fill up with gas, 2 trips around the airport trying to locate the return location and I WAS OUT OF THE CAR FOREVER!

I’ve never been so happy to be out of a car in my life. But what should have been a quick 30 minute train ride back to the Airbnb turned into a stuck in the train station b/c I didn’t retrieve my ticket upon entry, 45 minutes lost walking in circles staring up at the sky looking for the Eiffel Tower (my landmark where I was staying), a 30 minute bus ride that a nice Parisian woman put me on, and finally a 29 minute taxi ride back to my Airbnb. Transportation was not my friend this day. How a simple rental car return starting at 10 am on a sunny Saturday turned into a threat to my life, 3 hour lost as s**t in Paris, finally arriving home at 4pm day—I don’t know but nevertheless that was all the driving I was going to be doing in Paris that’s for sure! A map, google translate and the metro were now going to be my new best friends…or maybe I’ll just send for an Uber.

Kathleen
View all posts by Kathleen →